Days of Hope – The Chartists in Stroud 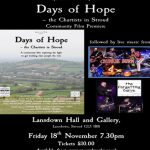 Premiere of the community film Days of Hope which focuses on the Chartists in Stroud. Those who marched and held meetings and protests to get the vote for all men in the U.K.

On 21st May 1839, a meeting took place on Selsley Common where over 10,000 people came together to campaign to extend the vote to working class men and for other parliamentary reforms. Working with a cast from the Stroud community, this film tells that story.
The film premiere will be followed by live music from the two bands who have written songs for the film – The Forgetting Curve and Chinese Burn

Written, directed and edited by John Bassett of Spaniel in the Works