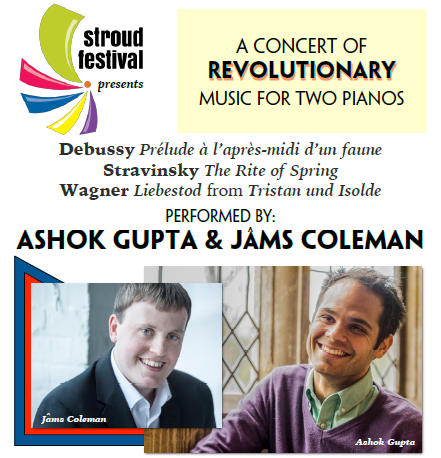 Stravinsky’s The Rite of Spring – arranged for 2 pianos

Stroud Festival invited talented pianists Ashok Gupta and Jâms Coleman to put together a programme of music considered at first hearing to be ‘revolutionary’. Stravinsky’s Rite of Spring seemed a natural choice, with its strident sounds and jagged rhythms, as it had caused a riot at its premiere in Paris on 29 May 1913!

Originally scored for ballet, it was arranged as a four-hand piano arrangement in 1913 by Stravinsky himself

Debussy brought about a more subtle, but equally revolutionary transformation; his musical language bringing sounds and colours to music hitherto unknown and Wagner could be said to have politicised opera in an almost revolutionary way.  His withholding of tonal resolution in Tristan and Isolde is generally considered to mark a turning point in Western tonality.

So, Stroud Festival is pleased to present the pianists’ choice of Revolutionary music, all arranged for 2 pianos. Tickets at discounted rates are available for music students as well as the usual concession groups.

Pianist Ashok Gupta studied at Cambridge University, the Royal Birmingham Conservatoire and London’s Guildhall School of Music and Drama and has won major prizes at several international competitions.
He has performed in major concert venues in London, Salzburg and Bonn and taken part in several international music festivals including the BBC Proms, the London Music Festival and Oxford Lieder Festival.

From Anglesey, North Wales, Jâms Coleman is a soloist, chamber musician and vocal accompanist with performances in the UK,across Europe.and live performances on BBC Radio 3, BBC World Service, BBC 2’s Proms Extra, BBC Radio Cymru and S4C. Jâms read Music at Girton College, Cambridge, where he was also a choral scholar. In 2016 he completed a Masters at the Royal Academy of Music where he then stayed on as a Fellow.