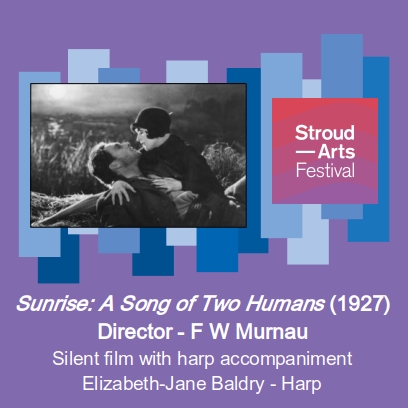 One of the most revered films of all time, a stunning masterpiece and a
pinnacle of craft which belies the resources of the time, Sunrise won the
Academy Award for Unique & Artistic Picture at the very first Academy Awards in 1929.

The only silent movie harpist in the world, performing live accompaniment to cinema screenings of early film, Elizabeth-Jane’s compositions have been used by ITV, BBC and Irish, Japanese, Danish and Canadian film, radio and television.

“Elizabeth-Jane conjured 95 minutes of riveting musical commentary
on the story, with sounds ranging from startling metallic eruptions at
moments of shock plot developments, through foot-tapping jazz-age
tunes in the dance-hall sequence, to voluptuous pastoral romances and
affecting melodies drawing us into deeper empathy with the characters’
emotional troubles.”
Review of Sunrise, Wiveliscombe Silent Film Festival.