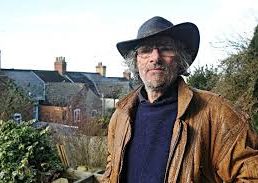 A memorial service and celebration of Rick’s life was held on Friday 31 January 2020.  Over 200 people attended in tribute to a man who inspired and encouraged so many.

Stroud Festival’s tribute below acknowledges the impact he had on the artistic community in Stroud.

To many people – artists, writers, musicians, performers of all kinds, venue folk, anyone connected with Stroud’s arts scene – Rick was synonymous with Stroud Festival.  Our ‘Man at Large’ for more than a decade Rick sought out acts to promote and projects to support, gave newcomers and emerging artists a helping hand and brought established names to a fresh audience. Here are some of the things he did under the Stroud Festival banner for which we have to thank him:

2011 – He researched the world of opera (admitting to knowing very little about the genre) and found a young opera company to bring to a wider, younger Stroud audience.  Opera Up Close later that year won the Olivier Award for their production of La Boheme which Stroud received with a standing ovation!  So Rick’s instincts were spot on!  Opera Up Close became annual visitors to Stroud, with exciting, creative productions of La Traviata, L’Elixir D’Amore and The Barber of Seville.

2014 – He instigated a coming together of groups to mark the centenary of Stroud’s own Laurie Lee. A host of events too many to mention attracted Lee devotees from far and wide and as a lasting memorial Rick encouraged the commission of a mural by students at SGS College.  This mural was displayed for a year above the Shambles market and now has a permanent home in Stroud Library.

2016 – He was key in the creation of Stroud’s very first Book Festival.  As a constant champion of the written and spoken word Rick was most proud that this went on to become one of Stroud’s most successful events under its current team.

2017 – His passion for encouraging children and young people in the arts led to Stroud Festival committing to a focus on the younger age groups. That year saw the first Children’s Festival take place in conjunction with the Stroud Festival of Nature (another of Rick’s passions)

2019– The children’s festival was re-born as Playground, in partnership with SVA, and Rick’s plan was that this aspect of Stroud Festival’s work should continue to develop.

These are highlights from an extraordinarily varied and busy life as Festival Organiser, and Rick’s own poetry readings and events, his Youth Filmmakers Showcase, his creative writing sessions and his promotion of a steady stream of visual art exhibitions added to Stroud’s rich tapestry in ways we will all remember.

Thank you Rick.  Your legend will live on and your work will be continued.